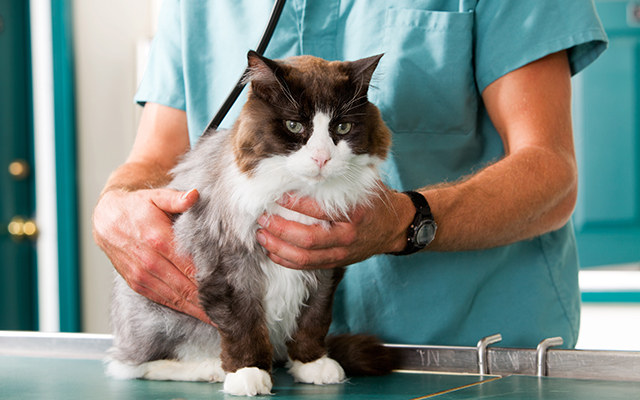 Perhaps with the exception of nail clipping, administering medication to your cat is probably the biggest challenge you’ll ever face in taking care of your feline friend.

You know that the pills are mandatory for the health and well being of your cat, but unfortunately, Mr. Destroyer of Antique Furniture will object. Oftentimes, his arguments come in the form of sharp retractable claws and canines inserted deeply in whatever part of your hand he can reach. Therefore, in order to avoid the clawing every time your feline companion has to take medication, it’s best to be prepared.

If you are the proud owner of a more cooperative cat, then you could attempt to feed it pills or liquid medication without constraining it too much. Start by placing it on a horizontal surface with its backside against your waist. Afterward, with your non-dominant hand attempt to slightly tilt the cat’s head upwards and open its mouth. Use your dominant hand to hold the pill or, if it’s liquid medication then the syringe.

Pills should be pushed down the center of the tongue and towards the throat to prevent your friend from spitting them right back out. For syringes, you can squirt the liquid in the cavity linking the gums and the cheek. Word to the wise, you don’t have long before your cat figures out you’re up to something he won’t like, so time is not on your side.

Restraining the cat with a thicker cloth

Okay, so that didn’t work out so well. Now you have some battle scars and Colonel Meowson still hasn’t taken the medication. It’s time for a bit of tough love. Use a cloth – thicker bath towels usually do the job – to wrap the cat’s upper body, including the front paws, tightly. While it’s restrained this way, tilt its head upwards and open its mouth. Insert the pill or the syringe tip and stand back. Way back.

When your cat is an escape artist

We should have probably mentioned that felines don’t really stay wrapped up for long and that they’ll fight you every step of the way. When force fails to do the job, it’s the moment to employ a cunning plan. Roll up a small cat food meatball, encompassing the pill. Roll a couple more decoy meatballs and feed them to Professor Purrstein, thereby earning its trust.

Now it’s time for the real part in your master plan: feed him the meatball laced with medication. On a side note, if the brand of cat food is not suitable, there are specially designed treats that mold neatly around medication. Ask your vet or local pet shop.

Final tips for administering the medication

Even though your feline friend – at this point it’s better to assume enemy – appears to have swallowed the capsule, there is a chance it might have gotten stuck somewhere the esophagus. To trigger a swallow reflex, try blowing softly on your cat’s nose while it’s restrained.

In order to prevent the animal from developing a long lasting negative emotion regarding medication, it is advisable to feed it a treat after you’re done. It may help enforce the idea that cooperation is rewarded. Good luck!